Some applications (not only in embedded computing) are dealing with the visualization of states of an underlying process or hardware. Other applications may have a lot of user interface (UI) components that are depending on each other.

In both cases the UI content is updated (directly or indirectly) based on asynchronous external events (e.g. user input or hardware states). It may seem trivial at the beginning to show some live updated UI states but it becomes much more complex if there are a lot of dependencies:

The application easily becomes a monolithic piece of software that is difficult to maintain. A particular piece of code probably knows too much about which UI components are affected by state changes and it must update them actively. So decoupling measures are required.

One such measure is the well-known observer pattern. It helps transforming a monolithic system into one composed of loosely coupled components. But the pattern is very clumsy for using it repetitively and all over the place (think of add/remove observers, notify, update).

So we have to raise the level of abstraction even further and use the reactive programming style instead: The application is regarded as a collection of objects with varying states and automatic propagation of state changes. Ideally the core logic (relationship between the object states) is only expressed in terms of rules that are valid over the whole program life time (so-called “invariants”) instead of dealing with low-level issues such as observer implementations, processing individual events and the initialization of object states. Rules could be defined with arbitrary lambda expressions instead of predefined functions for more flexibility.

The motivation for this blog article comes from problems faced during the implementation of reactive parts in an Android application. At that time (API level 17, Android 4.2) there has been almost no support for reactive programming in Android (beside the non-generic inheritance-based java.util.Observable/Observer and all those legacy lambda-incompatible “listener” APIs)

Reactive programming in the context of UIs is often also known as “data binding“. There are some existing libraries for Android in this area:

But for several reasons they didn’t match our needs: It should facilitate reactive programming in an existing code base without requiring the integration of a complete data binding tool set (e.g. many XML declarations and new data classes). The logic should be highly customizable e.g. by using lambda expressions instead of predefined functions. It also shouldn’t be an unmaintained “private” project (higher risk for rework?).

So we have written our own custom library that provides a minimalistic skeleton for wrapping of data sources with a generic interface, expressing rules and binding to any UI components. Customizing is done via lambda expressions (single method Java interfaces). Although the Android tool chain still doesn’t support lambda expressions directly a code folding feature in the Android Studio can show the affected code parts in a compact lambda-like manner.

The following example application demonstrates how reactive programming with the library could look like. It has two input fields for the name and the date of birth. Then there’s a text field showing a message depending on both inputs: 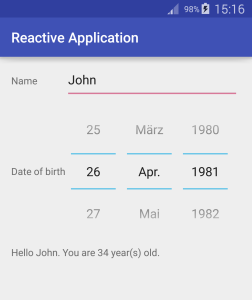 Here’s the most important part of the application source code:

How the use of reactive programming could look like
Java

As you can see the code above is divided into calls on three abstraction layers.

The following code snippet shows the most important Java interfaces in the library:

The mechanism for adding and removing observers is provided with the single method observe. It returns a helper object of type Binding that contains the context to remove the observer later.

This approach simplifies the management the observer subscriptions because you don’t need to save a reference to the data source AND the observer at the same time and you don’t have to correctly match them together in the clean up code. Furthermore all subscriptions can be saved in a list collecting the Binding objects.

Why isn’t the data provided when notifying the observer?

The observables are only notified of a (possible) change but the actual value isn’t provided in the callback. Why?

At first it seems easier if the callback on the observer would also receive the value as argument. But there are some reasons not to do it this way:

Implementation of a basic data source

The following code snippet shows the wrapping of an EditField view so that it serves as a data source:

The data binding is build on top of the observables. It interconnects the data source with a particular target. Therefore it has the following responsibilities:

The DataBinder.bind method provides a basic data binding for general purposes (not only for Views). It requires an Updater object that actually implements the access to the target.

Surprisingly the method doesn’t require a reference to the target. It turned out to be easier to save the reference to the target in the provided Updater instead (e.g. via surrounding context of an anonymous inner class). Data binding methods generally return an Binding object that is used to remove the binding.

Here are some code snippets showing the most important implementation parts of the library:

The classes are designed to be lightweight. They only contain minimal code for thread safety or performance optimizations. Such measures have to be added manually where required.

In particular the following measures are NOT implemented:

Semantics: Data as state (and not as event)

The data is regarded as a state. So we are focusing on the latest value. The order of multiple value updates in a short time is irrelevant as long as we are up-to-date at the end.

This assumption allows us to make some tradeoffs:

As a consequence we can simplify the design:

Data type to be used: Nullable and following value semantics

As a consequence all data types are nullable. It is legal to use a value of null and give it a special meaning (e.g. no alert). Note that we are talking of a null value inside a data source and not about setting the data source reference to null.

In general the libary doesn’t require that data types have a correct implementation of equals. But this may become important later if optimizations for skipping multiple updates with the same value are done.

Caution: Don’t use mutable data types to avoid unwanted side effects if a data source is accessed from multiple places.

Where is the setValue method?

Data binding is often used in contexts of data/form editing. Consequently it is rather based on a data-centric model (with objects being read and written on the same abstraction level and with only limited transformation of data to/from the UI).

But this library has been designed for use cases of visualizing states of running processes and hardware and for use cases of complex dependencies between UI elements. Manipulations on the model only happen sporadically at particular places with predefined commands or user interactions. So the data sources don’t have to be writable in general. Specific ways for manipulations can be provided by the concrete object implementations (e.g. using a clearText method as higher abstraction level interface instead of a generic setValue("") call).

Nevertheless the library provides some interfaces for writable data (e.g. ObservableWritableData) but without support by the rest of the library. Anyway data sources should only be writable where it is really needed and not by default. If deriving of writable data sources will be implemented later then it should be done with care:

Rationale:
The view should show the “actual state” and not an assumed state: Imagine that the setValue call is somehow rejected by the underlying data source or not correctly applied due to bugs. One should be confident that getValue really returns the truth. This approach even transparently visualizes any delays that happen during the update.

The library is designed to be lightweight. There’s no thread safety out of the box (at least not for the user of the library). So the thread safety depends on the concrete implementation of the data sources and observers.

If you have to break a circular chain of synchronous callbacks or if reentrancy is an issue (during a call from class A to class B there’s a callback to class A, in the same thread) then you have to implement countermeasures yourself (e.g. posting to a handler).

On the other hand the library gives you some weak guarantees:

Summary:
The library is rather a skeleton and contains almost no extra checks or measures. You still have to know what you are doing.

For a new project you may also consider existing libraries before deciding to write your own custom library.

Probably you should head for libraries that are suitable for general reactive programming (and not only specialized UI data binding tool sets). Here are some examples:

You don’t need a large library to start with reactive programming in a project. The core logic can be implemented within a few pages of code. But you still have to take a lot of things into consideration (e.g. thread safety) and understand the concepts.

Willi Flühmann is a software architect at Noser Engineering AG. He has studied electrical engineering and gained professional experience in numerous embedded software projects since 2002.