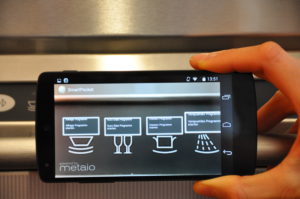 Augmented reality (AR), a buzzword describing the addition of virtual/contextual/visual enhancements to the real environment, is back in the spotlight after Microsoft’s recent release announcement of the HoloLens. The compactness of the device and the extent of the features promised by Microsoft are unprecedented in the area of consumer electronics and will most definitely revive and boost AR far beyond its former popularity. If Microsoft manages to live up to the expectations built up during the Build Event 2015, HoloLens might fundamentally change the way how designers and architects use CAD-applications and how product specialists provide remote support to their customers. Besides the gaming industry, which is an obvious prime candidate for developing immersive HoloLens experiences, a lot of innovation can be expected from the Internet of Things (IoT) corner too.

Yet another AR gadget?

Admittedly, AR applications available to the public on smartphones and tablets have failed to offer an immersive and natural experience so far, the most obvious reason being that wandering around wielding clunky tablets or staring at small smartphone screens does not feel natural. This impediment actually even defeats the point of augmented reality, since the user’s full attention is focused on a small device that only shows a fraction of the surrounding real world – in 2D. HoloLens is different in that it frees the user’s hands and does not restrict his natural field of view, therefore allowing for unhindered interaction with the real and the virtual world. Describing HoloLens as mere gadget would not do justice to the great potential this device bears.

The IoT consists of many specialized and low-cost embedded systems that more often than not have very limited user interfaces (UI) – if any at all. Sadly, this has called for misguided ingenuity to provide access to all functions such smart devices offer, resulting in arcane input combinations of very few pushbuttons and the use of even fewer LEDs to provide visual feedback. Many proud owners of supposedly smart consumer electronics eventually resort to looking for their misplaced user manuals after failing to find out how to access the more advanced options of their appliances – me included. This circumstance is simply due to the lack of a user-friendly UI that would actually make every available option discoverable and accessible in an obvious way. In most cases, this is only possible by means of a graphical user interface (GUI), which however incurs hardware costs that do not scale well with the increasing abundance of smart things we are surrounded by.

HoloLens and AR in general could jump into this widening breach by providing a standardized GUI to all smart embedded systems that have no display or UI on their own. The absence or limited availability of the latter might either be due to cost constraints or simply by design, e.g. any smart sensor operating in inhospitable environments with extreme temperatures. Combined with other technologies like Bluetooth beacons and/or visual tracking markers, AR devices could detect the presence of concealed embedded systems and provide individual context-accurate user interfaces for each of them.

Delegating the GUI rendering to the AR device removes the need for dedicated hardware with the sole purpose of providing user interactivity. Devices like HoloLens can display user interfaces that are visually more appealing and more intuitive than any cost-effective smart thing could ever offer through low-resolution displays and clumsy button acrobatics.